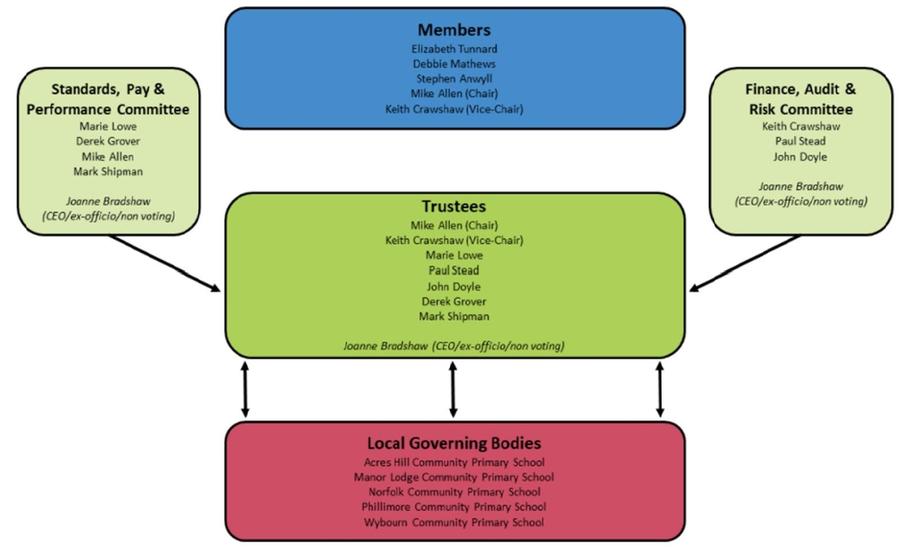 Elizabeth has a background in education and has a wide range of experience, including teaching experience within three schools in Sheffield, all of which were in areas of social disadvantage. She has also been headteacher in two local authorities, having been a primary headteacher in a range of schools including inner-city schools, highly disadvantaged areas, a village school and a CoE school in a more affluent area. She has experience of working in schools with high levels of pupils with English as an additional language. Elizabeth has worked as a local authority primary adviser, serving as a primary school adviser in Derbyshire, an associate headteacher, primary school adviser, senior adviser and principle advisor in Sheffield as well as being a principle adviser in North Somerset. When undertaking these roles she worked with schools on school improvement issues, led the team of primary advisers in the local authority and gained accreditation as a School Improvement Partner and Ofsted Inspector. Elizabeth is also the director of Education Forward Ltd based in Sheffield. In this role she works with a number of local schools on headteacher performance management and school improvement issues. She also has wide-ranging experience as a school governor, including being chair of governors at a primary special school, serving as a member of an interim executive board and has gained accreditation as a Local Leader in Governance, through which she has supported two primary school governing bodies. She also represents special schools on the local Governors Partnership and Policy Group, the Schools’ Forum and the Sheffield Association of School Governing Bodies.

Member Appointed by Members on 8 November 2018

Steve began his career in education almost 40 years ago as a primary school teacher in Sheffield. He went on to become a Local Authority Adviser for English and a primary school adviser and gained extensive experience of Ofsted inspection of primary, secondary and special schools. He had particular responsibility for improving literacy and helped to pioneer the introduction of Reading Recovery in the UK during the mid-1990s.

In 1998, Steve was appointed as one of the National Literacy Strategy’s first Regional Directors and later became National Director for Literacy before becoming a Senior Director in the Primary National Strategy. After returning to Local Authority work as Head of School Effectiveness, he joined the Qualifications and Curriculum Development Agency (QCDA) where he worked on the primary National Curriculum and on strengthening teacher assessment from Early Years to Key Stage 3. At the end of 2010, he was appointed as Head of the National Assessment team at Ofqual, responsible for the independent regulation and review of statutory assessment arrangements from the Early Years Foundation Stage up to the end of Key Stage 2.

Steve retired from Ofqual towards the end of 2014 and now works part-time as an educational consultant as well as being a school governor in Sheffield. He acts as an ‘independent expert’ for Oxford University Press and works with a number of Local Authorities to support their work on assessment. He has provided training for many senior leaders in primary schools on the implications of national assessment and accountability arrangements. He remains passionate about developing a rich curriculum experience for children and young people and about how assessment can be used to improve teaching and learning.

Debbie Mathews has been the Chief Executive of Manor and Castle Development Trust (MCDT) from 2005. MCDT is a charitable company which was established in 1997 to deliver the first community led Single Regeneration Budget programme. MCDT has 64 staff and a turnover of around £2m and approximately £7m of assets including shops, flats, land and the Quadrant, their prestigious managed workspace. MCDT delivers a range of local services including public health, employment, training, learning and positive activities for children and young people, including young people with Learning Development Difficulties, coordination of the volunteers in Park Library, and a nursery run in Woodthorpe alongside delivering support to many families.

Mike Allen has been a school governor in Sheffield since 2000 and has experience of education at a national level, both as a senior civil servant and later as a consultant working for the predecessor organisations of the DfE and its agencies, including the Higher Education Funding Council, the Leadership Foundation for Higher Education, the Learning and Skills Council, OFSTED and a range of universities and colleges. He was professionally trained in Information Technology, however he later specialised in developing and applying forms of programme management to the delivery of strategic and policy objectives. His focus was managing change based on engaging stakeholders at all levels and developing a shared understanding of desired outcomes and potential risks.

In 1997 Mike co-founded a consultancy company, Oakleigh Consulting, offering change and programme management support to organisations in both the private and public sectors, the company grew to turn over £10 million. In addition he has been a Director of a joint publishing venture between The British Computer Society and Oxford University Press, BDCL, the management Consultancies Agency and Wildscapes (a wholly owned subsidiary of the Sheffield Wildlife Trust). Mike is currently also a director at Learn Sheffield. He has also been a trustee of several charities, including the British Computer Society and the Sheffield Wildlife Trust, chairing the Finance and Audit Committees within each. As a member of the Worshipful Company of Information Technologies, Mike was one of the founders of the successful Hammersmith Academy. Having retired in 2011, Mike has devoted more time to school governance in Sheffield, and is currently a Local Leader of Governance. He is also a member of the executive committee of the Sheffield Association of School Governing Bodies and regularly attends the Governors’ strategy and policy meetings with the LA.

Keith is currently Chair of Wybourn Primary and has been a school governor in the city for approaching 30 years during which time he has led as Chair on two school mergers. He has recently served on an IEB; Chair of the Sheffield Association of School Governing Bodies for the last 6 years; Deputy Chair of the Schools Forum and also the City Wide Learning Body from 2012-15. He maintains a strong personal interest in early years. Prior to retirement he was a local authority chief leisure/cultural services officer for 15 years during which time he served on a number of regional and national boards and had responsibility for a budget in excess of £25m pa and a large and diverse staffing complement. His working life involved considerable experience of charity and company structures with the move of council services being delivered through charitable trust/company limited by guarantee vehicles. Currently a board member of Manor & Castle Development Trust, Deputy Chair of the Sheffield Industrial Museums Trust, Chair of the Ken Hawley Collection Trust and serves as Treasurer of an industrial provident society within South Yorkshire.

Derek Grover has been Chair of Governors at Broomhill Infant School Sheffield since 2010 and Vice-Chair at Norfolk Park Special School since 2015. He is an accredited National Leader of Governance and in that capacity has worked with the governing bodies of a number of Sheffield schools. He is retired from his career as a civil servant. He was a director of the Department for Education for 14 years, latterly as Director of Adult Learning. He is a member of the Sheffield Diocesan Board of Education, responsible for the Anglican Church's schools in the Sheffield Diocese, a Trustee of the Open College of the Arts and Chair of the Sheffield Association for the Voluntary Teaching of English. He is a qualified member of the Chartered Institute of Personnel Management and a Fellow of the Royal Society of Arts.

Marie works as an Improvement Partner for Learn Sheffield and as a strategic partner for a school company of 18 primary, secondary and special schools (Sheffield South East Learning Partnership). Marie taught in a wide range of Sheffield Primary Schools, including as a senior member of the Local Authority’s Task Force, filling leadership positions in schools in crisis. She was Headteacher of a school which became a “Beacon School” under her leadership.

She became Principal Primary Adviser in Sheffield and Primary Strategy Manager, managing a workforce of some 20 advisers and consultants, leading initiatives including literacy and maths, EAL, assessment training, Social and Emotional Aspects of Learning, Gifted and Talented programmes and the Intensifying Support Programme (ISP). Marie has worked across 6 Local Authorities, co-ordinating the work of advisers through an ISP Hub. Marie is a qualified Ofsted Inspector, School Improvement Partner and Performance Management External Adviser. She has taught on the National Professional Qualification for Headteachers, employed by Leeds Metropolitan University.

Marie devised and implemented a successful city-wide literacy and language strategy “Every Sheffield Articulate and Literate” (ESCAL).This strategy received national recognition and won the prestigious National Communication Strategy Award for three years running. Marie was invited to be a member of an advisory group working on national policy during the Year of Communication, presented evidence to the Minister of Education, and spoke at the Welsh Assembly on ESCAL’s strategy for developing Speech, Language and Communication.

Marie has presented at national conferences on a range of educational topics, and worked at national level, including with the Basic Skills Agency, the Qualification and Curriculum Authority, and the Prime Minister’s Development Unit.

Paul Stead has been the Managing Director and shareholder of a business employing 40 staff for over 25 years. He has a masters degree in business administration (MBA) and is the vice chair of governors at Pipworth Community Primary School where he has served as a governor for over 18 years. In addition Paul is also a governor at his daughter’s high school in Derbyshire.

Mark has worked in 3 schools across Sheffield during a 19 year period. He began his career at Chaucer School as a Physical Education Teacher and taught there for four years. He was then appointed to the position of Head of Physical Education at The City School. Two years later became a senior leader. After spending 9 years at The City School he moved to Sheffield Springs Academy. In January 2017 he was appointed Head of School before being appointed Headteacher in May 2018.

He is passionate about supporting young people to aspire and achieve, to be the best that they can be and make the most of their education.

Joanne is an experienced and highly effective head teacher and school leader with significant experience in school improvement support and in working within and alongside schools needing support. The CEO works closely with the Board of Trustees to ensure the aims and objectives of the Trust are met. The CEO provides strategic leadership to ensure there is continued success and sustainability across all schools.

Unfortunately not the ones with chocolate chips.

Some cookies are necessary in order to make this website function correctly. These are set by default and whilst you can block or delete them by changing your browser settings, some functionality such as being able to log in to the website will not work if you do this. The necessary cookies set on this website are as follows:

Cookies that are not necessary to make the website work, but which enable additional functionality, can also be set. By default these cookies are disabled, but you can choose to enable them below: